The Fargo Force recently completed Phase II of the 2022 USHL Draft. During this phase of the draft, teams can select any eligible players from the 2002-2006 birth years.

The Force began the draft with the 5th overall pick selecting Leo Gruba, a 6’1” defenseman from Lake Elmo, MN. This season he wore the “C” for Hill-Murray High School and helped lead his team to a third-place finish in the Class AA Minnesota State HS Hockey Tournament. He racked up 12 goals and 21 assists for 33 points in 31 games with the Pioneers and earned the title of Metro East Defensemen of the Year. Leo is a former defensive partner of current Force  player Joe Palodichuk.

With the 29th overall pick in round two, the Force took Moorhead native Harper Bentz. The 6’1”, 175lb, right-handed forward had a huge year for the Spuds this season, tallying 39 goals and 30 assists for 69 points in just 31 games. He helped lead his team to the Section 8AA Championship.

The Force went overseas for their next pick (#35 overall), as Max Wattvil was taken selected in the 3rd round . The talented, offensive minded, right-handed defenseman from Stockholm, Sweden tallied 29 points (9G-20A) for the Oskarshamn IK Jr. during the 2021-22 season.

Next, the Force selected Charlie Russell (#66 overall), a native of Skaneateles, NY. Russel played the 2021-22 season with the Bonnyville Pontiacs of the AJHL where he tallied 16 goals, 20 assists earning the Pontiacs’ “Top Rookie” award at the end of the season.

The Force picked twice in round 6 starting with Charlie Russell’s teammate at Bonnyville, Matteo Giampa (#85 overall). The 6’1”, 180lb forward put up 18 goals and 25 assists during the regular season and added another 2 goals and an assist in the playoffs.

Fargo then took Brian Lonergan (#95 overall), a 2005 right-handed defenseman from Montvale, NJ. Lonergan put up 2 goals and 23 assists for the Sioux Falls Power 16U AAA.

With the 98th pick of the draft Fargo selected 6’3”, 200lb right-handed defenseman, Kevin Scott. In 60 games with the Maryland Blackbears of the NAHL, Scott racked up 7 goals, 11 assists and 65PIM throughout the season.

The Force then picked up Adam Marshall (#113 overall), another highly skilled MN born forward, with the 113th pick of the draft. In 28 games for Benilde-St. Margaret’s High School Marshall netter 23 goals as well as 24 helpers for 47 total points and a 1.67PPG average.

The Black n’ Blue traveled to Northern Minnesota for their next pick, goaltender Hampton Slukynsky (#128 overall). Slukynsky had a huge year for the Warroad Warriors, he went 26-4-1 with a 1.59GAA, .925SV% and a whopping 9 shutouts. Hampton is the younger brother of former Force forward Grant Slukynsky.

In round 11 with the 158th pick Fargo picked up another defenseman, 2004 John Henry. Henry led the Bishop Kearney Selects 18U AAA team to the National Tournament, and was an assist machine putting up 66 apples as well as 18 goals for 86 points.

Sticking with the right-handed defensemen, the Force took 2005 born Owen Thomas in round 12 (#173 overall). The Chicago, IL native had an impressive stat line for the Notre Dame Hounds (SK) U18 AAA team with 18G-25A=42points in 40 games.

The Force switched back to offense in round 13 with a left-handed forward from Brainerd, MN, Anthony Menghini. Menghini played 16 games for the Des Moines Buccaneers last season where he tallied two goals and an assist in 16 games. Followed by 37 games with the Austin Bruins of the NAHL where he cashed in 20 goals and 11 assists in only 37 games during the regular season, plus a goal and two assists in 3 playoff games.

The Force looked to Europe for their next selection, Verner Miettinen of Espoo, Finland. The St. Cloud University commit, wore the “A” for the Kiekko-Espoo U20 team put up 31 points (11G-20A) in 35 games. He also represented team Finland in the 2022 U20 International Jr. Hockey Tournament.

The Force then bolstered their affiliate list, taking two younger players with their next 2 picks. Cody Polumbus was taken by Fargo in round 15 with the 218th overall pick of the draft. The 2006 born forward had 49 goals and 28 assists in 59 games for the Sioux Falls Power 15U AAA during 2021-22.

With the 233rd overall pick, the Force took 2006 Tommy Holtby, a physical, right-handed forward from Victor, NY. The 16 year old played with the Windy City Storm 15U AAA team, scoring 21 goals and 19 assists in 81 games.

In round 17, Fargo picked up Mason Johnson, a left-handed defenseman from Lakeville, MN. He was the Captain on his HS team this season, scoring 3G and 25A in 30 games for Lakeville South.

With their final pick in Phase II of the 2022 USHL Draft the Force selected Anthony Yu, a centerman from Baldwin Park, CA. Yu helped lead the Shattuck St. Mary’s 18U team to the National Tournament by racking up 23 goals and 46 assists for 69 points in 55 games last season.

“We are very excited about our Phase 2 picks”, said Force GM, Cary Eades. “A ton of work goes into developing our draft list, and I’d like to thank our entire staff for their commitment in scouting and ranking our selections. Early in the draft, we tried to address some holes in our returning roster for next season, then later on, we were able to take some younger guys that are probably a year away from playing in the USHL. We are looking forward to having all of our draft picks on the ice together at Main Camp, which is June 5-8 in Fargo.” 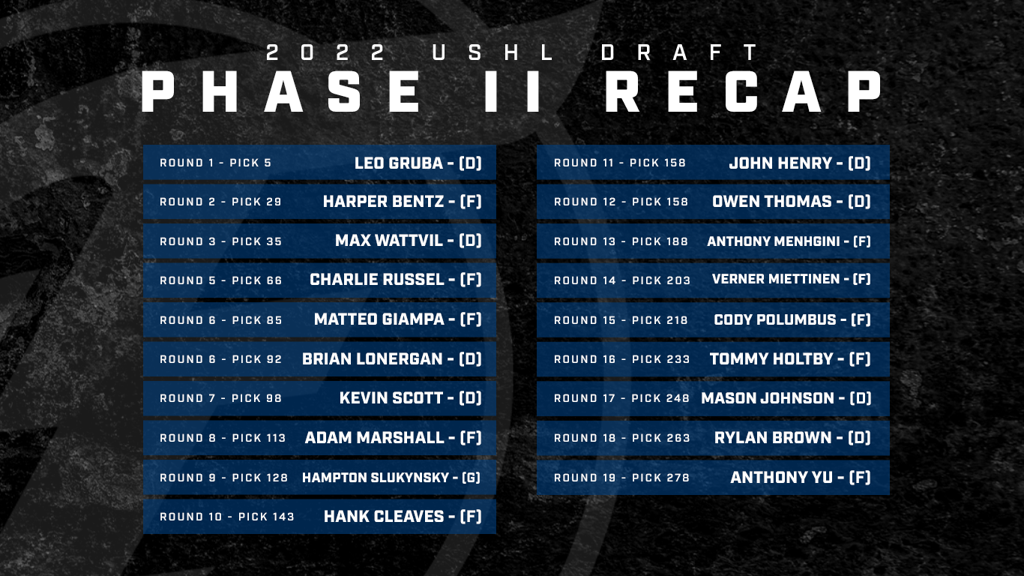