Phase I of the 2022 USHL Draft kicked off today,  consisting of 10 rounds of players with 2006 birthdates. Phase 1 is also known as the “futures draft.”

The Fargo Force began their draft with the 4th overall pick, selecting Mac Swanson from Anchorage, Alaska. Mac Swanson, the son of NHL Center, Brian Swanson put up big numbers for the Team Alaska 15’s this season. He led the team in both goals and assists with 27G and 52A for 79 points in just 42 games played.

The Force then traded the 20th overall pick to Youngstown in exchange for the 39th & 54th picks.  With the 39th overall pick they chose Jake Merens, a dynamic skating forward with a high-level of creativity from Highland Park, IL.

In round 4 with the 54th overall pick the Force selected Louis Wehmann from Orono, MN. Wehmann put up 34 goals and 27 assists for 61 points in 27 games this season to lead Providence Academy in scoring as a sophomore.

Fargo’s next pick wasn’t until round six when they selected Mason Stenger, a 5’11, 176lb left-handed defenseman from Maplewood MN with the 80th overall pick of the Phase I Draft.

With pick 95 the Force switched sides and went for a right-handed d-man, Justin Bartley, a 6’2”, 190 defenseman from Chicago, IL. Bartley & Merens were teammates on Chicago Mission 15O team that won the USA Hockey National Championship. In round eight the Force went back to offense with Thomas Zocco, a right-handed Forward from Staten Island, NY.

In round nine the Force selected a goaltender Mason McElroy from Otsego, MN. In 22 games as a teammate with Stenger at Benilde/St. Margaret’s High School this season, McElroy went 17-5-0 with a 1.77GAA and .926SV%. Followed by Luka Rohloff, a left-handed defenseman from Grand Rapids, MN.

With their final pick in Phase I of the 2022 USHL Draft the Fargo Force selected Ryan Lund of Warroad, MN. The 6’2, 200lb defenseman had 5 goals and 19 assists in 31 games for the Warroad Warriors this season.

Tomorrow Phase II of the Draft begins at 10:00AM. Phase II is open to players of all ages who are eligible to play junior hockey and are not currently on one of the protected USHL rosters.

To follow along with 2022 USHL Draft check out the Fargo Force social media or visit https://ushl2draft.rinknet.com/ to access the Live Draft Board. 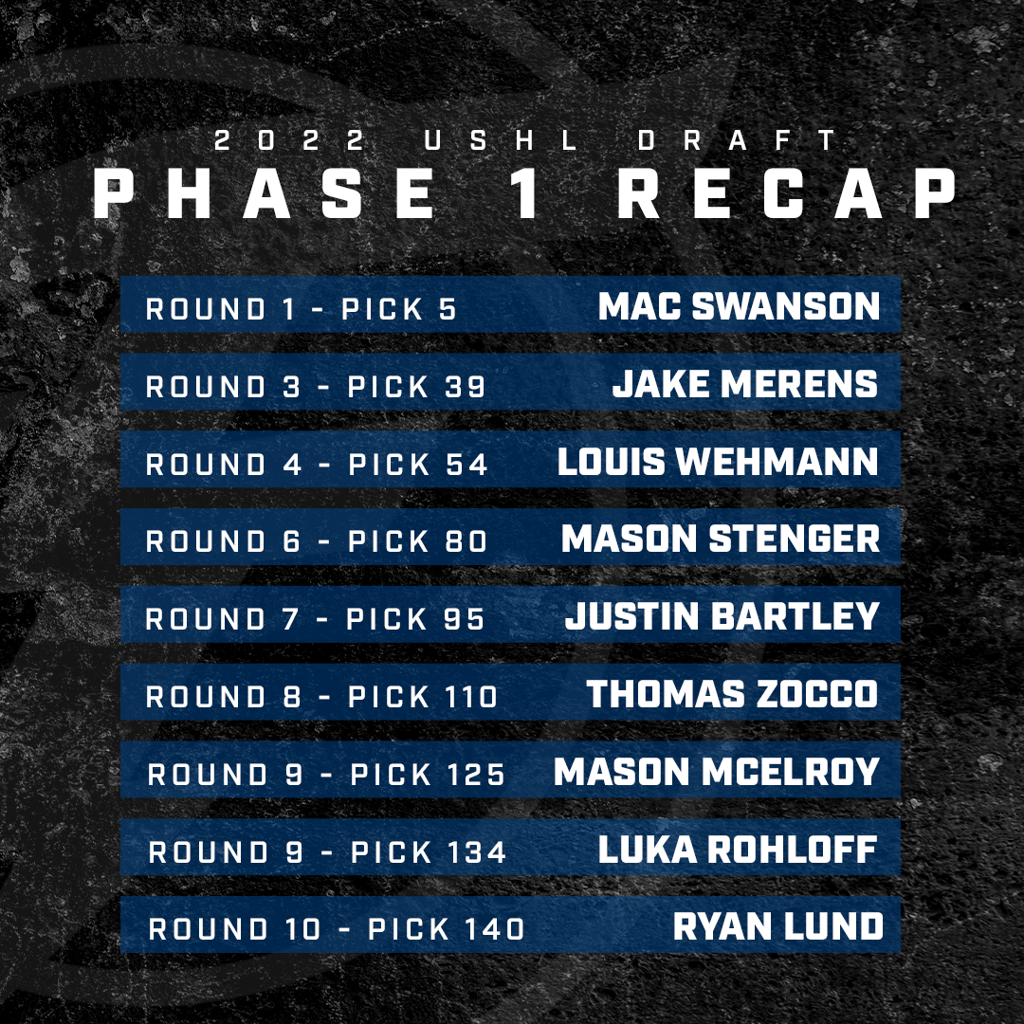