Today, September 23rd, Head Coach Scott Langer announced the captains for the 2021-22 season. Tyler Rollwagen will be wearing the “C” for the Force this season, accompanied by Trevor Griebel, Kyle Smolen and Andre Gasseau all wearing the “A”

“This is a group of players the staff can rely on to continue the great culture here in Fargo, All four of these players have proven to be leaders throughout our entire Training Camp and preseason schedule.” -Head Coach Scott Langer

Tyler Rollwagen was selected by the Force last season in the 2020 USHL Dispersal Draft. The 5’11, 182lb forward was a key player in the lineup, playing in every single game for the Force during the 2020-21 season. In his rookie season with the Force Rollwagen tallied 8 goals and 10 assists as well as being a big asset on the PK. The captain is a skilled player in all three zones and brings an unwavering leadership presence both on and off the ice.

“Tyler has paid his dues and learned a lot from previous leaders of the Fargo Force, he has embraced being the hardest working player and having the care for his teammates.” - Coach Langer

Trevor Griebel joined the Force last season, in his rookie year he tallied 4 goals and 13 assists as well as a +16 plus/minus rating. His impressive season helped earn him the 2021 Fargo Force Most Improved Player Award. The 5’10, 165lb defenseman adds an aggressive presence on the Fargo blue line and is always ready to go to bat for his teammates.

“Trevor is a player that does things the right way every day, he leads by being a great example of what we expect as a Force player” - Coach Langer

Kyle Smolen is a forward from Crystal Lake, IL. Smolen is a veteran on the team, now entering his third season with the Force. During the 2020-21 season Smolen put up 9 goals and 6 assists, since joining the team in 2019 he’s brought energy and an aggressive style of play to the Force. His presence on and off the ice has helped contribute to the Force’s success over the last two seasons and will no doubt continue to do so.

“Kyle is a very Driven athlete, he demands things to be done the right way, he has been a key veteran to help our younger players get acclimated to the Identity we want to see on and off the ice” - Coach Langer

Andre Gasseau is new to the Force this season but has already proven himself to be a key component in the Force’s offence. During preseason the 6’4 203lb forward tallied 5 total points (1G-4A) in three games for a 1.67PPG average. He’s a quick, instinctual player that has quickly established himself as a leader on the team.

“Andre has been a key addition to this year’s Fargo Force, he has a great understanding of what leadership is and how to help other players become leaders” - Coach Langer

The Force begin the regular season this weekend at the USHL Fall Classic in Pittsburgh, PA. Kicking off the weekend on Saturday, September 25th at 4:30 PM CT with a game vs the Chicago Steel, followed by the Team USA 18's on Sunday, September 26th at 1:00 PM CT. All games will be streamed via HockeyTV. 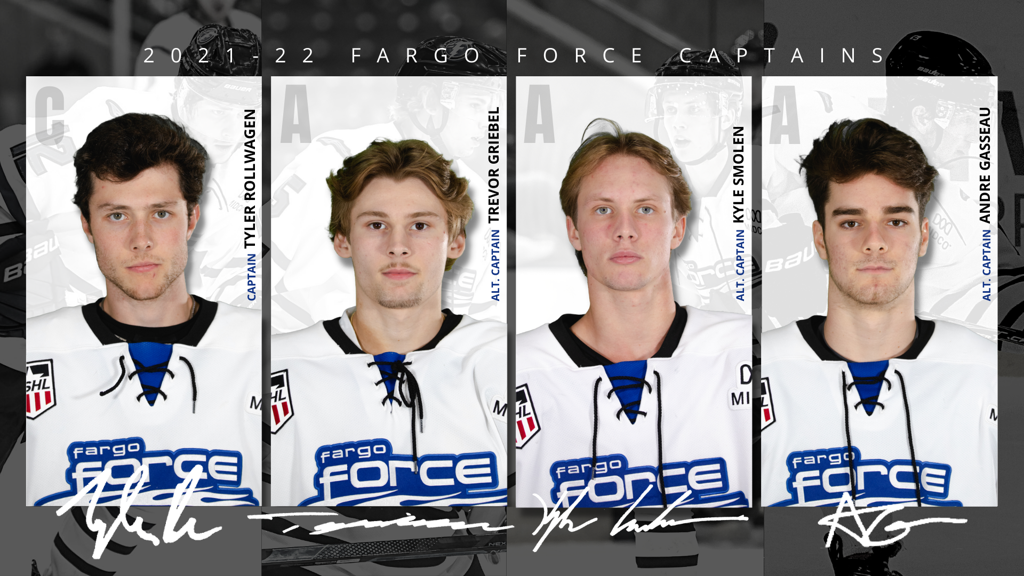