The #4th seeded Fargo Force defeated the Western Conference regular season campion Tri-City Storm last weekend in a thrilling 3 game series. After dropping game one to Tri-City 3-2, Fargo came back to win it with a 5-4 OT victory in game two and a 3-2 victory in game three. The series was a battle, as neither team lead by more than a single goal the entire series. The #3 seeded Sioux City Musketeers defeated the #2 seeded Omaha Lancers in round one of the playoffs with a 2-0 shutout win in game one and a 2-1 victory in game two.

This weekend the Force and the Musketeers will go head-to-head in the Western Conference Finals to claim a spot in the Clark Cup Championship series. Game one will be held in Sioux City with a 7:05 PM puck drop, game two will be on Force home ice with a 6:05 puck drop, and if the series goes to game three the deciding contest will be back in Sioux City at 7:05 PM.

After two huge wins in Tri-City the Force are heading into this weekend’s competition with a renewed sense of confidence and a drive to win. The Huglen, Broz, Monds line had an outstanding weekend posting 12 points. Six of the 12 points came from Force forward Tristan Broz, who scored and 2 goals and added 4 assists, playing an instrumental role in Fargo’s wins. Huglen and Monds both scored key goals in Saturday’s contest, the first from Huglen, with the golie pulled, to tie the game with 1:14 remaining in the third period, followed by an OT game winner from Cody Monds. Fargo goaltender Brennan Boynton had a solid weekend between the pipes saving 29/33 on Saturday and 36/38 on Sunday. His dominant performance kept the Force within striking distance in both of their comeback wins.

Sioux City played two great games in Omaha last weekend, giving up only 1 goal the entire series. They were backstopped by New Jersey Devil’s draft pick Akira Schmid, who put up a 25 save shutout on Saturday and went 29/30 on Sunday giving him a .982 save percentage in the playoffs so far. In seven wins against Fargo during the regular season Sioux City forward Chase Bradley scored one or more goals in 6 of them. He contributed a big powerplay goal against Omaha last weekend as well and will be a player to watch for in the upcoming Western Conference Finals.

This weekend’s series will be a closely contested grudge match between the last two teams standing in the Western Conference. Both are looking for the chance to take home the 2021 Clark Cup Championship Trophy. 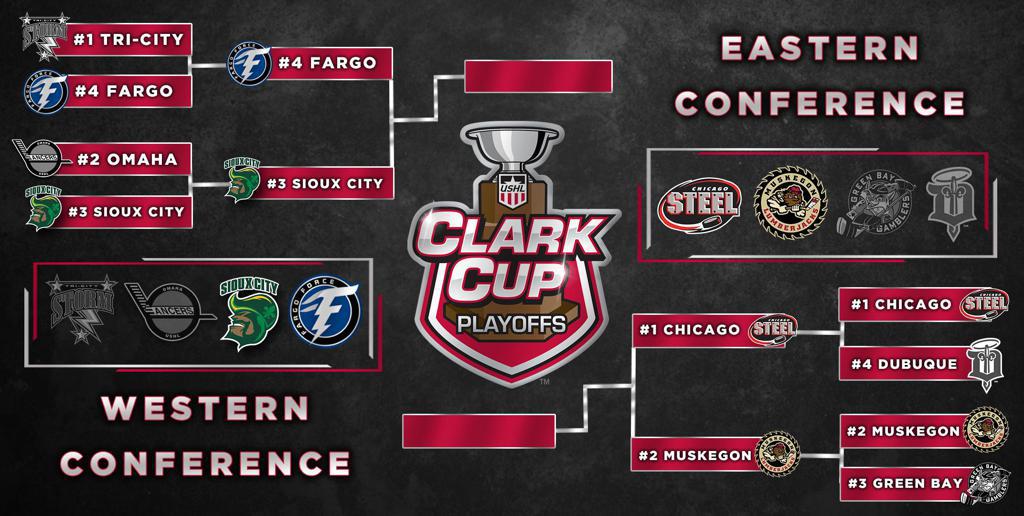